Two Moons was the most controversial of the chiefs because he had participated in the Battle of Little Big Horn less than forty years earlier. Two Moons’s group of Cheyenne surrended to U.S. General Nelson A. Miles in 1877, and soon after that Two Moons began serving as Miles’s scout. Two Moons was appointed the Head Chief of the Cheyenne Northern Reservation and acted as a diplomat for Native Americans, meeting with President Wilson to argue their cause in 1914. Two Moons died in Montana in 1917 at the age of seventy.

John Big Tree, of the Seneca Nation, became an actor later in life, appearing in almost sixty movies (including some that are still well-known today, such as Stagecoach and She Wore a Yellow Ribbon). He claimed to be the only model for Fraser’s most famous sculpture, “End of the Trail,” and said that his profile from his forehead to his lip had been used as the basis for the head on the Buffalo Nickel. He died in New York in 1967 at the age of 90. (Fraser disputed both of Big Tree’s claims and said that another Native American named Big Tree, a Kiowa who was also named Addoeette, was actually the Big Tree who had modeled for the Buffalo Nickel.) 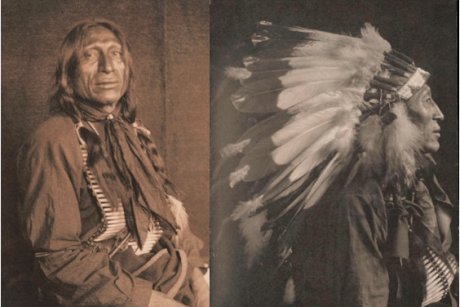 Chief Iron Tail, one of the models for the Native American profile
on the obverse of the Buffalo Nickel

Iron Tail, an Oglala Lakota chief, was one of the most famous Native Americans of the late 1800’s and early 1900’s. He was a performer in Buffalo Bill’s Wild West shows and was frequently photographed in costume. He was described as a gentleman and a diplomat, a wise and kind man, and Buffalo Bill Cody called him the “finest man I know, bar none.” He died in Indiana in 1916 at the age of 74.

Fraser said there were several other Native Americans who had modeled for him, but these three are the only ones he named, and they are the ones who were usually publicly associated with the head on the Buffalo Nickel.

There is also some confusion about the model for the buffalo on the reverse side of the nickel. According to Fraser during a magazine interview, the model was Black Diamond, a 1,550-pound American bison that was the “contrariest animal in the Bronx Zoo.” Fraser said that he visited the Bronx Zoo and stood for hours, waiting for Black Diamond to present him with a side view to sketch. There are two problems with this story: Black Diamond was not at the Bronx Zoo (he always lived at the Central Park Zoo), and the animal on the Buffalo Nickel doesn’t look very much like Black Diamond. Fraser may have been referring to Bronx, a large male bison who did live at the Bronx Zoo, but nobody knows for certain.

After the Buffalo Nickel went into circulation, Black Diamond became something of a celebrity, with many people coming to the zoo just to see the buffalo from the coin. Amazingly, after an unsuccessful public auction, the Central Park Zoo sold Black Diamond to A. Silz, Inc., a meat-packing company. Despite many efforts to save him, Black Diamond was slaughtered. A taxidermist mounted his head and turned his hide into an automobile robe. The A. Silz company began selling steaks to restaurants under the “Black Diamond” brand.