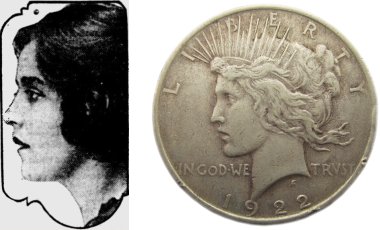 Teresa de Francisci, the model for Lady Liberty on the Peace Dollar, was born Mary Teresa Cafarelli on May 4, 1898 in Naples, Italy. She was almost five years old when her family left Italy and immigrated to the United States on a steamer ship. According to Teresa, as that ship approached New York Harbor she became fascinated by the Statue of Liberty and often posed to imitate it as she was growing up.

When Anthony de Francisci won the contest to produce the design of the new Peace Dollar, the production process needed to move very quickly. De Francisci didn’t have time to find a professional model to sit for his sculpture of Lady Liberty, so he decided to ask his wife, Teresa, to act as the model instead. Unlike Anna Willess Williams, the reluctant model who had to be persuaded to pose for the Morgan Silver Dollar, Teresa was very excited to be the model for the Peace Dollar. As she wrote in a letter to her brother Rocco:

“You remember how I was always posing as Liberty, and how brokenhearted I was when some other little girl was selected to play the role in the patriotic exercises in school? I thought of those days often while sitting as a model for Tony’s design, and now seeing myself as Miss Liberty on the new coin, it seems like the realization of my fondest childhood dream.”

De Francisci left the window open in his studio as he worked because he liked the effect of the wind blowing through his wife’s hair and thought it would work well for Lady Liberty. He frequently insisted the the profile of Lady Liberty on the Peace Dollar was not exactly like a photograph of his wife, and that in particular he had “elongated” the face of Lady Liberty to make it into a “composite face” that “typifies something of America.”

Still, even a quick comparison between the Peace Dollar and a photograph of Teresa de Francisci shows that the profiles are almost exactly the same.

When the Peace Dollar was released, a Philadelphia newspaper printed an article praising the choice of model. Lady Liberty, it stated, “never looked better than in the ‘cart wheel’ that the Philadelphia Mint has just started to turn out.”

Teresa de Francisci was widowed on October 20, 1964. In her later life, she was a frequent invited guest at coin collecting events, where she was introduced and honored as the face on the Peace Dollar. Teresa died on October 20, 1990, exactly twenty-six years to the day after the death of her husband. She was 92 years old.